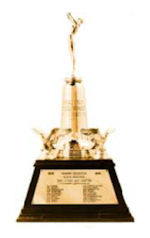 The families of the Arizona musicians first learned of the Arizona Band Trophy when Amelia Nadel, Alex's mother, received a letter from A. J. Homann, Commanding, USS Arizona, Pearl Harbor, which she shared with us. He stated:

"During the short period of time Band Unit No. 22 served on board the USS Arizona, of which your son was a member, they acquired a very good reputation, and in the elimination contest of the "Battle of Music" held at Pearl Harbor, T.H., they won first prize in all contest as best band in the U.S. Pacific Fleet. An appropriate trophy, with all names of member of the Arizona band engraved thereon, is to be presented at a later date."

Shortly after, on April 2, 1942, the Navy released the following story which was carried in newspapers from coast to coast:

"The most dramatic answer to that question has been furnished by the incident of the ship's band of the battleship Arizona.

"On December 7 they went to their battle station, one of the most hazardous on the ship--down below, passing ammunition to the guns above. To a man the Arizona's band was killed when the battleship's magazine exploded.

"Part of the program of recreation at Pearl Harbor last year was the 'Battle of Music, 1941'. The bands of the ships in port contested. One of the best and near the top in scoring when the war began was the band of the Arizona. When its total loss was discovered, the other contestants unanimously agreed to award posthumously to the Arizona's band the trophy at stake.

"Great interest in the trophy has been expressed by the U.S. Navy School of Music at Washington, and in response to its request, a picture of the trophy was painted by Alfred Dupont, illustrator at the fleet recreation office, and sent to the national capital, to be placed on permanent exhibit there. Henceforth the trophy will be known as the Arizona Trophy.  After the war, it will be put up again to be challenged, when the Battle of Music will be resumed."

"Members of the Arizona's band whose names are on the plaque are;

Information researched and compiled by N. A. Nease and provided on USSARIZONA.ORG free of charge.
May not be reprinted in any form, other than non-profit educational use, without prior written permission of the author.