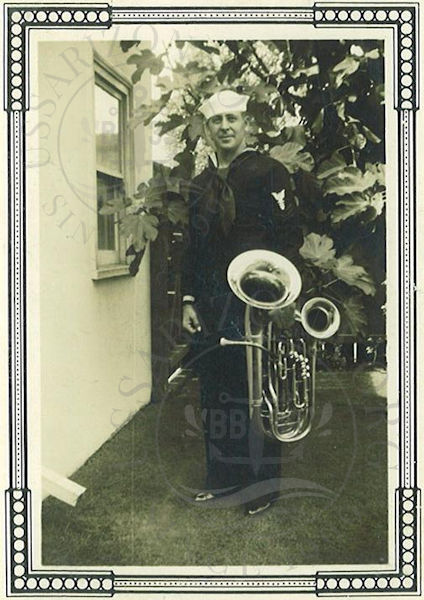 Kinney reenlisted for the last time on 13 November 1941 to serve another 4 years only weeks before the attack on Pearl Harbor.

Frederick William Kinney, along with all the members of the USS Arizona's Pacific Fleet Navy Band No. 22, was killed in action at his battle station on December 7, 1941 at Pearl Harbor, Hawaii.

Frederick was married to Elizabeth (Betty) Marie Von Babo and they resided in Washington. They had no children. Betty later remarried and has 3 daughters, 10 grandchildren, and 19 great-grandchildren. Betty Tino passed away in 2012 at the age of 94.

My Precious Memories of Fred Kinney

By Elizabeth (Betty) Marie Von Babo Tino
USSArizona.org Exclusive
First appeared in the December 2008 issue of Messages from the Arizona 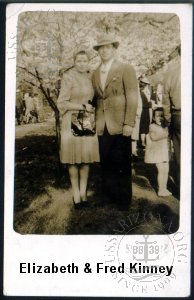 Fred Kinney and I met while he was stationed at the Navy shipyard in Bremerton, Washington in 1936. He was a member of the navy band and he played many different types of horns. He also led the civilian band at Port Orchard and was the jazz band leader for Bremerton High School.

Fred was given special permission to work with the school band master, Wallace Hannah, to acquaint himself with how Hannah worked as a direc- tor of music. Wallace Hannah was known as an excellent band master and Fred wanted to learn all he could from him.

I met Fred at the high school where I was secretary and treasurer of the pep club during my senior year. I had to contact him to play for one of our school dances. This started a friendship that would later turn into a romance.

After I had graduated from high school and had gone to business college, we started dating (we had kept our friendship through the years). Fred was preparing to be shipped out for sea duty at San Pedro, California on the USS Argonne; he was to be the band leader. Fred surprised me one night, while we were out, with the question, “what would you like for Christmas, a ring or a set of silverware?” I said, “I’ll take the ring!!” He presented me with the ring later as we sat in a restaurant (The Chicken Coupe Inn) eating hamburgers. We happily made plans for our marriage and it was decided we would get married after his ship got back in port, which would be in California.

Fred left soon after Christmas and I didn’t see him again until June 10, 1938. I took a train to California so we could be married. He picked me up at the train depot and we drove to a minister’s house in San Pedro where we were married. One of his commanding officers and wife stood up for us.

We lived in San Pedro until 1940 when his enlistment was up. I remember those first days of our marriage so well. I can still see the hot California sun as I lay on the beach tanning near where his ship was moored. Fred would get on a small boat with his band, and it would bring him over to shore. Pretty soon I would see a long line of sailors walking along the breakwater with their instruments in hand. Fred would be at the front of the line and he would lead them all to the club house at Point Fermin where they would spend the afternoon outside prac- ticing. I could lie on the beach and listen to them play. 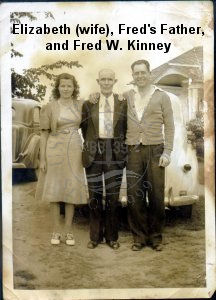 In October when his enlistment was up, Fred when to Washington, D.C. to see if he could be in the band master school. He was accepted into the school and reenlisted for another four years, after which he could retire. At this school, he met all the boys that would later become part of his band on the USS Arizona. The boys in this school were the “cream of the crop.” They were only picked to attend the school because they had been the best in their high schools and all had only been in the Navy for 5 months when they completed the Navy band school. There were 20 of them; all from different states.

As I recall, only one was married since they couldn’t marry until they were a certain age.

As Fred prepared to ship out with his boys, he realized they didn’t have anything big enough to pack all the music and small instruments in. He came home and told me he had figured out a solution; he had gone someplace where you buy coffins and had purchased a coffin packing box. He had all the boys pack the music and small instruments into this huge box and then carry the box down to the Potomac River. The image of those young boys carrying that coffin box loaded with their instruments has always stayed with me. It was almost as if they were taking their coffin to sea, as not one of those young men was to live to see the New Year.

I stood on the embankment looking down at my husband of 3 years walk down the gang plank and onto the small boat with the boys of his band. There were a few others there as well to say goodbye to the men who meant so much to us. They boarded the small boat which took them down the Potomac River to Norfolk, Virginia where they boarded a ship. They traveled through the Panama Canal to San Diego, California where the USS Arizona waited for them. The Arizona left San Diego and headed to Pearl Harbor, Hawaii where they remained until the fateful day when they were attacked the morning of December 7, 1941.

I had been waiting back in Washington, D.C. to find a ship that could get me to Pearl Harbor. I received word from Fred around the end of September that plans had changed. They were supposed to be coming back to Bremerton, Washington for some repairs on the ship. Fred wanted me to go back home to Bremerton and await word from him. The following week I left D.C. on a train and headed home to Bremerton, where I was to wait until they came to the shipyard in Bremerton, but they never came.

The news that we were getting wasn’t good during that time and I wasn’t able to hear from Fred very often. The ship was always out to sea doing maneuvers, going here and going there, in and out of port in Hawaii. Their coming to Bremerton had been put off, maybe because of the war heating up.

On the day that Pearl Harbor was bombed, I was home living with my parents. We heard the grim news, like the rest of the country, over the radio. We then began the long days of waiting for word from Fred. We didn’t receive word for quite awhile, but we feared the worst. The first telegram said that it was possible that he may have lost his life, but was inconclusive. 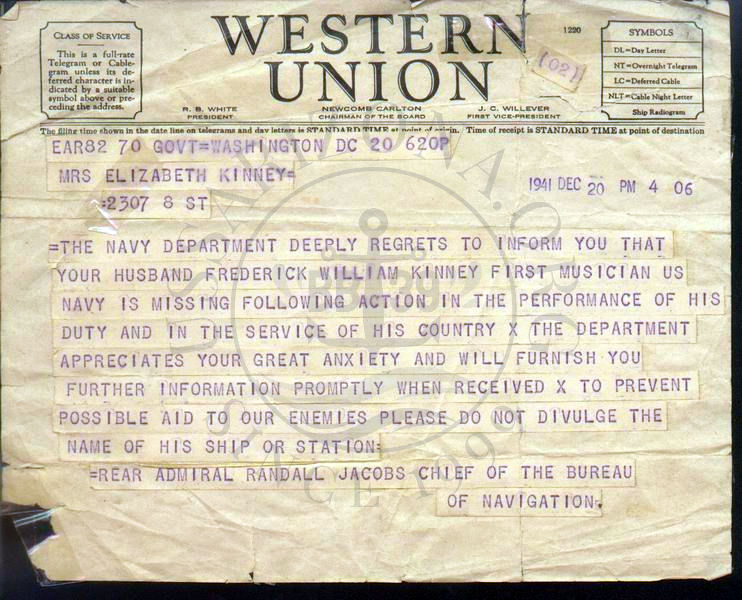 I started doing volunteer work as soon as Pearl Harbor was doomed.

Word had gotten out that they needed all the help they could get, so to do what I could to help in the war effort, I was working as a volunteer at the Civilian Defense Department. I helped with general office work. Mr. Pagget, who was in charge of the department, knew what the band did during the attack, that their battle station was below decks passing ammo, and knew how bad the attack had been. He figured that I would need a paying job (since HE figured I was now widowed) so he helped me get a job at the Public Health Department.

One day when I came home from work, as I went upstairs to my bedroom, my mother followed behind me. She said to me, “I never wanted to be the one to tell you this, but we just got word that Fred has been officially declared to have lost his life.” Then she handed me the telegram stating the horrible news. I had been holding out hope that possibly Fred had been on shore during the attack, and at this news my world crumbled around me. My family loved Fred as if he was their own son, and it was devastating news to them also. I spent the next days in a sorrow filled haze. I had so many precious memories with my husband, my first love. 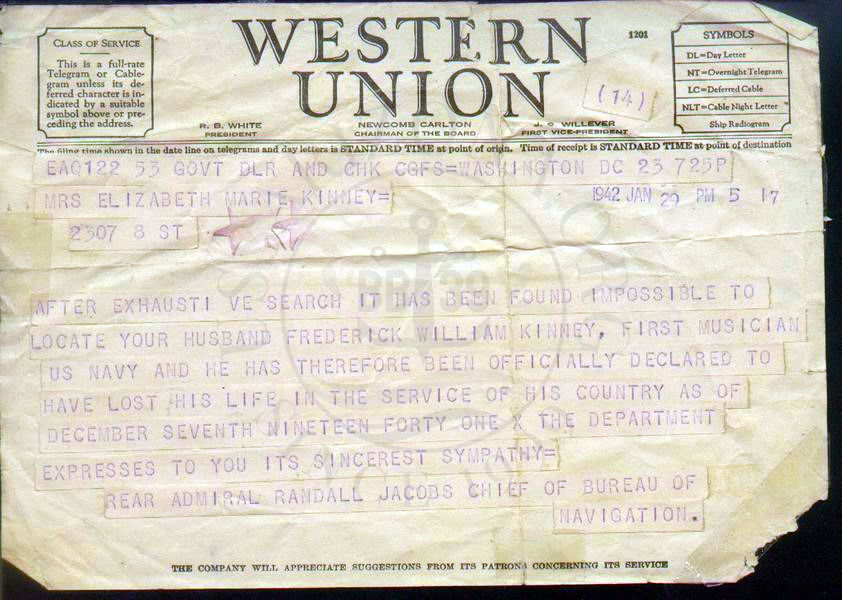 Not long after that the USS Tennessee came to Bremerton for repairs from Hawaii, and our friend Jimmy Smith, who was Band Master on the Tennessee, came to see me. He told me that he and Fred had been together after the Battle of the Bands and they had walked back to their ships together. He wanted me to know beyond a doubt, that Fred had been onboard doing his job when the ship was attacked. I now knew without a doubt that Fred was truly gone.

As the sad days of early 1942 wore on, I found myself reliving many times the last time I saw Fred and the boys of his band. The boys were excited to be off, as they hefted the heavy load of the coffin box filled with music and instruments. All those boys had their hopes and dreams packed into that coffin box; they had no idea what the future held, but they gave their all, their precious life, for the freedom of our country. Because of them, and many others like them, we are free today to live as free men and women.

I later remarried and have 3 beautiful daughters, 10 grandchildren, and 19 great-grandchildren. I have never been able to go to Hawaii. I haven’t wanted to see the place that is so filled with sadness for me. I will always love Fred and have a place in my heart for all those lost boys.