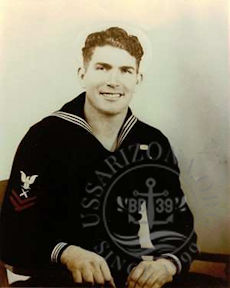 My name is Leland Howard Burk and I am a survivor of the USS Arizona on December 7, 1941.

I was born July 29, 1915, in Callao, Missouri. I joined the Navy in September, 1940, and had basic training at Great Lakes, Illinois. I was stationed aboard the USS Arizona after boot camp in 1940 at Bremerton, Washington, in the 3rd Division and was aboard it when the attack occurred in 1941.

As I recall, on December 7, 1941, most of the men had just finished chow when the Air Defense Alarm sounded the top gunners to their stations at about 7:45 a.m. Shortly after that, General Quarters sounded all the crew to their battle stations.

It was about 7:55 when the first Japanese planes came in. It caught us by surprise. We had suspected something was up a few days before the attack. When our ship had been out on maneuvers, there had been contact with submarines. The Captain had also given permission to shoot back if any planes started diving. We had returned to Pearl Harbor on Friday night.

The bombing started at about 8:00 a.m. I was in the lower handling room. I was a 3rd Class Gunners Mate and my battle station was on the fourteen inch guns. When they sounded General Quarters, I was at my battle station holding onto the tray that we pulled to ram the shell into the gun. When the bomb hit, it was all we could do to hold on; it shook the ship so you could hardly stand up.

We were immediately ordered out of the turret to fight fire. When I came out, I crawled through an overhang onto the quarter deck and there were guys laying all around moaning and groaning for help. Most of their clothes were either blown or burnt off. I helped move some of the injured and their flesh would stick to your hands when you handled them. We got them on some boats that were picking up the injured. The ship was on fire and we started a bucket brigade. The ship was starting to go down. Lt. Commander Fuqua was the Senior Officer aboard the ship. I remember saying to him, "Commander, there's no use in fighting it anymore," and he gave us orders to abandon ship. We threw a life raft overboard and got on it. The ship was so low at this time that we could just step on the life raft. We realized that there were no paddles, so we started swimming ashore for Ford Island. The oil was thick on the water and some of it was on fire. There wasn't any fire where we went in. While swimming toward shore I heard some guys hollering. They were giving up and going down. As I turned around to see them, a big wave of water hit me in the face and oil and water got into my mouth and I swallowed some. Another sailor and I were staying so far apart and swimming together.

When we swam past a dredging line, we realized we could wade on in from there. When we got on shore we got under a palm tree and used the leaves to wipe the oil from our faces and eyes. At that time I was also sick at my stomach from the oil I had swallowed. The first wave of bombing had stopped. A truck drove by and picked us up and took us to a dispensary on Ford Island so we could clean up.

The dispensary was just being built and did not have a roof on it yet. It just had walls and a concrete floor. The second wave of the attack was starting. While standing there in the dispensary, a bombshell landed about 15 feet away from me and it went through the concrete floor forcing white sand back out of the hole. I was lucky again as it did not explode--it was a dud. I think it may have been an armor piercing shell and was meant for a steel deck of a ship. We started to run outside but the guys said the planes were machine gunning the area. Anyway, I had survived a second time in about a half-hour.

The only clothes I had on was a pair of white shorts, a skivvies shirt, and shoes. The Marines had opened their barracks to us and we went in and got some Marine Khaki's from their lockers to put on. They didn't have any shoes big enough to fit me so I had to wipe the oil out of my own.

Later, the survivors of the Arizona were taken over to a receiving ship and we were issued dungarees and blue shirts. I was temporarily assigned to the USS Tennessee. Two days later, I was assigned to the USS Pennsylvania Battleship which was in dry dock.

It was here I met up with my good friend Paul Terry whom I entered the Navy and went through boot camp with. We were so glad to see each other. He thought I had gone down with the Arizona. He could not do enough for me. He gave me cigarettes, money, and a blanket. At this time, this was all I had. My records, money, and everything I had went down on the Arizona.

After about a week in dry dock, we headed the Pennsylvania back for the states. The ship was re-armed with 5-inch dual purpose 38 guns and quad 40 millimeter guns and 20 millimeter guns at Hunters Point in San Francisco. We then headed for the Midway battle but by the time we got there the battle was over. All we saw was debris and oil from sunken ships.

From there we went to the Marshall and Gilbert Islands. Next, we headed to the Aleutian Islands--Attu and some others I don't remember. We took them but got the bow blown up and had to go back for repairs. We stopped at Kodiak, Alaska but had to go on to Bremerton, Washington, to get the repairs.

Afterwards, we went to the Kiska Islands to take them from the Japs, however, when we got there they were gone. We then went south to the Heberdine Islands to rendezvous to take the Philippines.

I didn't make it to the Philippines as I was ordered to Washington, D.C. for Advanced Gunnery and Hydraulic School for six weeks and became First Class Gunners Mate. After schooling, I was sent back to San Francisco to help put the APA 206 Sibley into Commission which was a troop carrier. The first raid we made was to take the 4th Division Marines into Iwo Jima. After we unloaded the troops we served as a hospital ship. We had six doctors aboard. We buried several men at sea each morning.

The next raid was at Okinawa, where the 1st Division Marines were to serve as a back-up. We made a false run on the lower side of the island. A lot of the ships were hit by suicide planes. We didn't unload our troops.

I was promoted to Chief Petty Officer and transferred to Northwestern University as a ROTC and V-12 instructor. I was there for about one year and after my six year term was up I was discharged in September, 1946, at Great Lakes, Illinois.