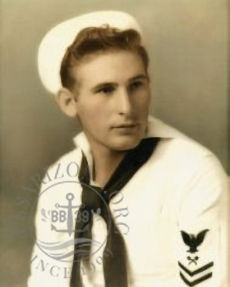 "I need to tell this, so that young people will understand I lost a lot of good, dear friends over there. .. it's just awful hard to even think about them. And almost lost my own life. They were really my family. I was just a young kid, and it...was hard to lose all of those people. It's hard, hard for people to realize... what it does"

Well, I was out on deck doing the morning chores, which you did every morning; all of a sudden, this plane come along, and [I] didn't pay much attention to it because planes were landing at Ford Island all the time. And all of a sudden, the chips started flying all around me and the plane it was strafing me. They went between the ship and Ford Island, and I could look up and I could see the meatball on the wings and I could see the pilot sitting up there. I ran forward and tried to get under cover. And the officer of the deck, which was one of my division officers, ordered me back out to close the hatches on the thing and then another came around about the same direction and strafed us. But I don't think anybody that was out there working at the time got hit.

I went forward and went inside the ship, and then started back to my battle station and a bomb went off. I learned later it was back about turret number 4 about where I'd been working about 10, 15-minutes before. And evidently it knocked me out, ruptured both my lungs; And all the lights went out. I don't know how long I laid there. But when I woke up, I picked up a flashlight and started down, into my battle station. They wouldn't let me in the door-the water tight door which you're not supposed to open in battle conditions-but I managed. It seemed like it was about 20 minutes and I finally outlasted the guy on the other side. And when I got into the turret, it was totally dark in there except the flashlight. And one of my division officers...said, "boy you're a good boy Carson". And he said that's exactly what we needed. And it was, it was no panic down there or anything. But there was smoke and water knee deep. ...and the senior division officer told us to all come out on deck & help; fighting fire & so forth, but there was nothing we could do. The ship was a total loss and the commander said well we just as well abandon ship. But before I did, I run into a friend of mine; he was crying and, and asking me for help. And I looked at him in horror. And the skin on his face & his arms and everything was just hanging like, like a mask or something. And I took hold of his arm. Skin all came off in my hand. And there, there was just nothing in this world I could do for that boy. And that has bothered me all my life. But he died. He did die later.

Well, they gave the word "abandon ship" and we just practically stepped off on the quarter deck into the water...I didn't know how bad I was hurt. And I got out there about 10 feet and I guess I must have passed out. (I) went down in the water and everything was just as peaceful and nice, that it would have been so easy to just let go. And I saw this bright light and something made me come to. And so I got back up to the surface of the water and the oil was a fire all around; the fire was approaching me, wasn't but two feet from me and he reached down and pulled me up out of the water. And that man saved my life. And a motor launch came along and I either jumped or fell into the motor launch. And they took me over to Ford Island. (I) walked down to the barracks with the rest of the crew; I guess I must have passed out because my friends and shipmates took me over to the sick bay at Ford Island later there was a dead shell hit right in the center of the sick bay, and it kind of brought me to and I looked over. Another shipmate [was] laying across from me in I guess the bulk head and he was holding his intestines in with his hands. And he looked up at me, and he said, "war sure is hell isn't it, shipmate." And I said, "yah it is." And I wasn't bleeding anywhere so I got up and walked out of there.

He and his wife, the former Anna Reynolds of Bolivar, had lived on a farm five miles northwest of Bolivar since 1961. He was born in Corbin City, Kan., which lies just south of Cherryvale in the southeastern part of the state. The family worked on farms in the area. Mr. Carson went to school in Cherryvale, including Cherryvale High School, and enlisted in the navy in 1940.

He was a seaman on the Arizona when the Japanese bombed Pearl Harbor on Dec. 7, 1941, and sank that ship and several others. Mr. Carson was below decks when the first bombs hit on that Sunday morning 60 years ago and the Arizona began to sink. He made his way into the No. 2 gun turret, which housed three of the ship's huge 14-inch guns, and then climbed to the top and out the hatch. The harbor was filled with smoke and fire, he recalled later, and all was chaos. Later he was blown into the water by another bomb and then rescued by a fellow seaman. His lungs ruptured, Mr. Carson passed into unconsciousness at that point and remembered nothing more until he woke up in an oxygen tent in a hospital on shore.

After spending several weeks in the hospital to recuperate from his injuries, Mr. Carson rejoined the fleet and spent the rest of the war in the Pacific, part of the time being stationed on a supply ship. He also did a stint helping operate the airstrip on the otherwise uninhabited island of Palmyra in the South Pacific. He was promoted to chief petty officer.

In 1955 Mr. Carson, who had never married, was working as a navy recruiter at the post office in Jefferson City. Also working there, in the Bureau of Public Roads, was Anna Reynolds, who had grown up beside the S-curves on Mo. 32 west of Bolivar. They met, began dating and were married Jan. 20, 1956. The Carsons lived in the Philippines when he was assigned there by the Navy, and later at a Navy base in California. His death came a week before the couple's 45th anniversary.

All during his years in the Navy, Mr. Carson dreamed of having a farm someplace back in the Midwest when he retired. In 1961, when he left the service, he and his wife bought the 160 acres on a gravel road which they still owned at the time of his death. At first the Carsons had a dairy operation and then became beef producers. While in the Navy, Mr. Carson taught a shop class and was always fascinated by machinery, particularly farm machinery, and shop tools. At one time he owned three tractors, two pickups, a van and a car, and in his professional-size shop on the farm he had more than 20 portable circular saws, in addition to many other power tools.

Mr. Carson never returned to Pearl Harbor after the war and had never seen the shining USS Arizona memorial built atop the relics of the ship until last fall when he and his wife were taken back as guests of National Geographic. The sight of the memorial and the ruined ship in which so many of his friends are entombed proved to be a painful and torturous emotional experience for the retired Navy man. "I'm glad I went back," he was to say later, "but I don't ever want to go again."

Surviving besides his wife are two brothers and their wives, Robert and Ilona Carson, who live on a farm adjoining that of Carl and Anna, and Jerry Lee and Kitty Carson of Dearing, Kan.; a sister, Joan Robinett of Coffeyville, Kan.; a sister-in-law, Luella Anderson, Bolivar; and several nieces, nephews and cousins, most of whom live in Kansas.